The Best Way to Rank in Google for “How-to” Keywords

Trying to rank in Google for “How-to” queries is a real mixture of the scientific and the artistic.

But, there are certain strategies and practices you can follow to ensure you regularly rank well in the eyes of Google…while simultaneously creating content that users love.

In this video from Ross Hudgens at Siege Media, you'll learn some of the patterns and tricks to help you rank for “how to” keywords…

And for proof of this post's effectiveness…

Just Google “How to Rank for How-to Keywords” and you'll find the post from Ross Hudgens right there on the first page.

How to Rank for “How-to” Keywords

In this video, Ross breaks down the lessons and patterns we see Google rewarding in today’s search results. As it turns out, these are the same things that users love, too.

Hi, I’m Ross, founder of Siege Media. And today, I want to show you how to rank for “How to” queries. And so, what I mean by “How to” queries is basically any keyword or topic that starts with “How to” at the front. That could be “How to tie a tie,” “How to paint a wall,” “How to tie your shoes.”All of these queries have a similar structure in terms of how to rank for them on the web, and I think there is a general framework we can think about when building them, no matter what vertical you’re in.

So, the first step I have for ranking for “How to” queries is actually to structure your site with subheads that utilize H2s and also use verbs. What I mean by that is if you see a post that’s ranking well on the web, and also just thinking about how Google works, they want to highlight and rank, and also users want posts that are easily scannable and they could essentially extract the answer in a quick, easy way.

And how you would do that if you’re a robot, is you would look for subheads or bolded areas that say, “Step 1: here’s the step. Step 2: here’s the step.” And the closer you are to the top of the post and also the “How to” definitional area, the more likely it is that you’re actually increasing the confidence interval for robots to understand that this is a “How to” post and you are clearly instructing users how to do that.

Alternatively, if your “How to” does not need much depth, you could also do this with ordered list markup. This also sends a clear signal to Google that this is an order of events users should follow. These ordered lists can also be used in conjunction with a table of contents should your post warrant one.

The next piece of that is placing a verb at the front. So, what I mean by a verb is something like “Utilize a blue book,” or “Wrap the tie.” I’m actually not very good at tying a tie, but “Wrap the tie over your neck.” Those kinds of indicators show a direction that is easily understandable for users.

And why this is important is because you’ll occasionally see a “How to” post that utilizes a different first word… a noun potentially, at their front. So, maybe it’s, like “Step 2: Siege Media is a good resource.” That’s not a very good way of explaining the language of a “How to,” in terms of being directional, of how to do it.

And that’s important because Google increasingly is trying to show quick answers. And if you’re a user and you’re Googling “How to tie a tie,” and the directions aren’t clearly verbs in terms of “step 1, step 2, step 3, step 4,” it is less likely you’re going to easily understand that “How to” in that short format. Meaning, you’re more likely to click a result.

And it’s increasingly the case today that it seems like Google wants to highlight results that can give you an answer without ever clicking it. And the more easily understood that is, whether it’s correlative or causative, that verbs are more preferential for “How to’s,” it makes sense to use that in terms of your site structure. And H2s are important as well because, again, this is showing importance in hierarchy to Google.

It’s easy to understand and it’s something they can extract and potentially show in that quick answer and higher overall.

So, the second tip for ranking well for “How to” type queries is actually to use, at the end of the title, some kind of “in X seconds,” or “in X easy steps” kind of clickthrough-rate add-on.

So, what I mean by that is, “How to tie a tie in four easy steps,” “How to make French toast in 30 minutes or less.” These kinds of two exact frameworks are easily… things that people prefer and want to click more often because they say, “I can do this thing easier or I can do it in less time.” 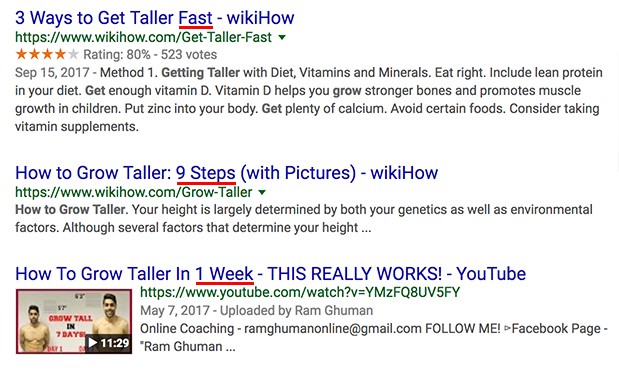 So, that’s like the perfect alignment of hitting the keyword and then also adding that your post is better at the end, with these kinds of either time or ease frameworks, which are the easy steps or X time. And of course, the time can always vary depending on the market.

But if you’re making French toast, it’s probably okay to be 30 minutes, but if you’re saying “How to tie a tie in 30,” you would want to say, in 30 seconds or less most likely. So, pertain it to your vertical. Make sure you’re actually a good result for that and you match that expectation with the title with the actual landing page experience. And your overall, I think, get more clicks and rank higher because of that title.

My third tip for actually ranking better for “How to” queries, is actually to solve for multiple learning methods and also user intents. So, if you do a search like, “How to tie a tie,” you’ll actually see multiple variations of how to explain that exact thing.

And what I mean by that is, video is often something that occurs on “How to” type searches, illustration is another one, and text is another one. And some people prefer to learn by watching that video of someone tying the tie. Other people don’t want to watch a video. Maybe they’re in someplace, they’re in a library where they don’t want to be playing audio, they don’t have headphones.

Therefore, an illustration or photos of each step are going to be helpful and informative for them. And they’d prefer that over the video-type format. So, by doing that, you’re also solving for multiple user types and making your page overall, a better result for the whole of Google users. A great example of that is this post from Ties.com, which solves for every intent type. 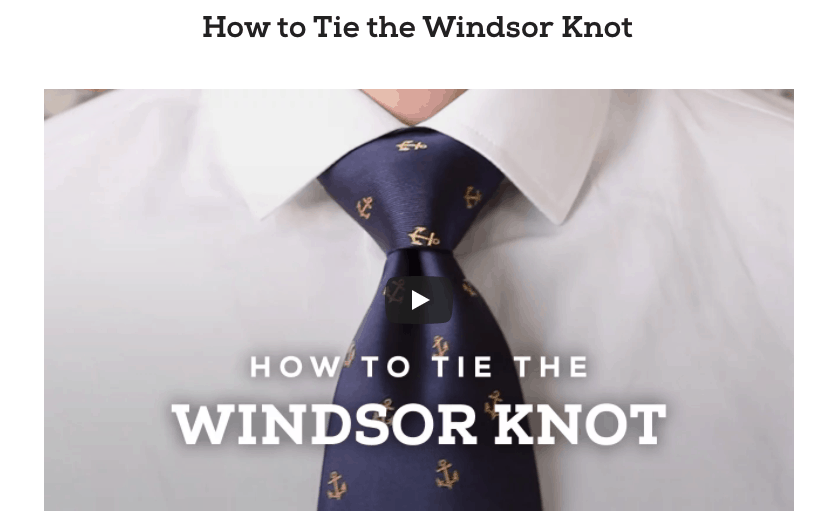 As opposed to, if you just make the “How to tie a tie” post and you don’t create a video, you are excluding a segment of that population that would prefer a video over the other formats. Therefore, to be the best result for “How to” query, you need to solve for those multiple intents in a holistic, comprehensive way in order to rank better.

My next tip for ranking better for “How to” queries is actually to make it more linkable with infographics or subvisuals.

This doesn’t make sense for every market, where there isn’t necessarily an outreach market available for it. But if you’re in the right space where maybe you’re creating lifestyle content, or it’s kind of a fun topic, maybe it is French toast, you can build a comprehensive infographic that brings in the visuals that you have, and then you can then pitch that asset in order to get links back to your “How to” posts and make it more linkable and shareable overall.

But maybe you’re not in a market where infographics make sense, you can also have the subvisuals that explain and can live on their own in terms of, step one, step two, step three. And that will also make it more shareable, digestible, and easy to use and link to.

I prefer the one-two punch of having those subvisuals and also the infographic below that because it lowers the friction to people linking to your content and also makes the content just the best fit overall in terms of having content for Google and for users and that whole holistic thought process of having multiple shareable assets that makes it linkable.

Step 5: Restate the Title Before the Subheads

And finally, my fifth tip for ranking for “How to” type queries is to restate the title in a sentence right before the subheads begin that say, “Step 1:, Step 2:”. And why this is important to restate it is, if you look at a lot of “How to” queries, you’ll actually see that Google is pulling out a sentence that is clearly informative for users, redefining what they’re looking for.

So, if you have a search like “How to tie a tie,” you might have a sentence right before that first step in your actual post that says, “And here’s how to tie a tie in five easy steps:”. If I’m Google, that’s easy to extract and build confidence that those steps subsequently are actually tying into how to tie a tie as opposed to some other thing that maybe you decided to go on a rant on, indirectly.

So, they pull that into their quick answer as well and you’ll see that there is clearly a connection of how users interpret that, how Google finds significance in seeing the keyword right before that first step one and then tying those together in order to make it the most relevant “How to” post overall.

So, hopefully, these tips were valuable for you and you can use them to rank for highly competitive “How to” queries. If you like this post, please give us a thumbs up, subscribe, and contact me if you have any feedback or comments. Thanks for watching.

Ross Hudgens is the founder and CEO of Siege Media. He is a frequent speaker at marketing conferences and has a background helping startups and building visibility for businesses through content marketing. Siege Media made the Inc. 5000 in 2017 and was also named one of San Diego's Fastest Growing Companies. Click here to read the original article on Siege Media.